I’ll admit it: I used to really enjoy watching Maria Sharapova play tennis back in the 2000s. Clearly this is proof that I have a long association with Russia, which warrants a full investigation. I’m sure CNN is preparing a special report on this matter right now! 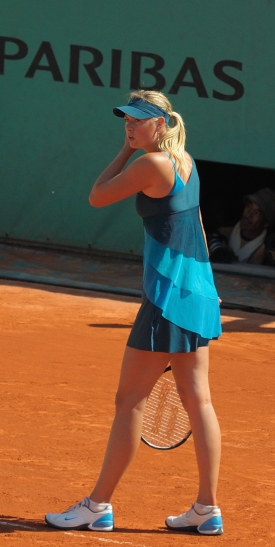 Oh, yeah, and sometimes I can’t sleep at night, so I’ll get on the Periscope livestreaming app. Inevitably, after a few minutes of the mundane, “talk to me, I’m bored” attention seeking that is Americans using the app, I will scroll the map over to other countries, which occasionally results in finding people in Russia who are livestreaming. Sometimes I will watch for a few moments, despite not being able to understand whatever the hell it is that they’re talking about. How does one say “talk to me, I’m bored” in Russian, anyway?

Obviously that’s even further proof of my connections with Russia! You see, I “favorited” one of those Periscope streams, possibly by accident, or possibly so that the beautiful Russian lady who was livestreaming would know that even us rednecks from the evil, evil American South still like regular, ordinary people from Russia, despite whatever the hell is going on between their government and the NWO government.

Hey, what can I say, I’m a good humanitarian like that! You never know when a “like” or a “heart” will make someone’s day. That is the world we live in. Who needs a pat on the back, or a hug, or an actual human-on-human interaction when a “like” will do?

I submit that in this day and age, one could save a suicidal person’s life with a “like,” but that’s only if Facebook shows you their post. The algorithm might decide that McDonalds’ sponsored post is more important and bump your suicidal buddy off your feed. You won’t see the post, so you won’t know to “like” his most recent update where he asks if anyone truly gives a shit about him. And he’ll die, because Mark Zuckerberg is running for Dictator Supreme, and needs McDonalds’ money to fund his campaign!

Ah, but you see, CNN would say I’m practically admitting to interfering in the 2020 Dictator Supreme election already! CNN would also say that I could be suicidal, that I don’t “like” anyone as a result of that last paragraph, and that I must be a psychopathic maniac! They would also claim that because I said something about being a redneck, I must listen to country music.  And I’d tell tell them to stop hacking my damn Youtube video history, that’s supposed to be a secret! You see, I have a reputation of being a heavy metal dickhead, and if it became known that I secretly listen to country music, people would talk. They might even post on Facebook about it!

Oh, and the CIA and NSA already know about all of this. Trust me. You don’t have to report on me. They’re already recording every second of everything I do. So are the anti-social media networks who know more about me than I do. And the Google that has a record of everything I ever searched for. They’d be the first to tell you that I am, clearly, a psychopath. Habitual liar. Not to be trusted with anything I say. Everything I do is one big PsyOps, except when I’m being real.

CNN would say I’m always being real, even when I’m joking. How do you convey a sarcastic tone through text anyway? A Tweet could start a war because someone doesn’t know you’re being sarcastic. Then Facebook Live lets you be a star as you commit your war crime, live! There’s nothing to be done, though, so have fun, unless, of course, you commit Wrongthink.  Then they can quickly shut your page down!

Even when I’m sitting in the corner, all alone because everybody’s being boring and talking about pop culture again, I know I have the CIA and the NSA with me everywhere that I go! So even if I’m talking on my phone and no one has called and I haven’t called anyone, I know that someone somewhere is listening and it doesn’t make me feel so alone! I have a team dedicated to me! A satellite! A cloud drive! It all knows what I know. And when the mechanical, all-knowing robot needs to produce the information so that the obsolete biological robot overlords can legally arrest me with for Wrongthink, it’s all right there for the taking. And if I ever forget who I am and where I’ve been, my Smartphone knows, and it always will!

After all, I am just the latest version of this particular biological robot model, limited to only one of a kind that was manufactured anywhere in the world! But something happened along the way! The Private Elementary School Malware, Versions 1-6, infected my processor. It was so effective that even the future software update, Public High School, Versions 7-12, was ineffective at wiping the malware. Now the resulting malfunctioning, biological robotic model walks the world, free and unleashed!

Caution: Malware side effects may include thinking for yourself, finding things entertaining that others don’t find entertaining, and causing other biological robots to think of you as a strange person, or maybe just an asshole.

For it is the Great Current Year, Version 2017! And we have more ways to talk, type, text, skype, podcast, write, or livestream anything, absolutely anything, and we have the sum of all historical information, propaganda, and the recorded works of all the great thinkers and all the great morons, put together, right there for the taking! But despite all of this, despite it all, we’ve nothing to say, and no drive or ambition to say it, because someone might not “like” it and that’ll get us fired from our job!

And that was the story for how I suffered brain damage during Summer Vacation. Every word of this story is a lie, especially the truth, except when it is a lie, then it could potentially be the truth or something resembling a made up story that represents the truth. You should not believe any word I say. This is all one long act of performance art. Any resemblance to any characters, fictional, or me, is imagined and I am not the same person I was yesterday because billions of cells have died and new cells have been created since then. I therefore reject being thrown in a cell because I am not the person that committed this Thoughtcrime. I am not responsible for accidents or injuries. Void where prohibited.

Disclaimer: The above picture of Maria Sharapova was thanks to biological robot who serves as a professional photographer, often called by his name, Roland Garros.  He likely wouldn’t endorse my Ridiculous Nonsense, but by stating this, I have complied with the Creative Commons licensing required to use the photo.